Difference between revisions of "SHA-1"

SHA-1 is an iterated hash function. It can be used to compute a 160-bit hash value for messages having a length of less than

(iv in the first iteration) is added to the output of the state update transformation (feed forward). 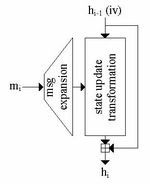 something like: best know attack to date: kind of attack, which variant has been looked at (e.g. round-reduced), complexity, and reference to paper and abstract.

may be make here a new page with the other cryptanalysis results.